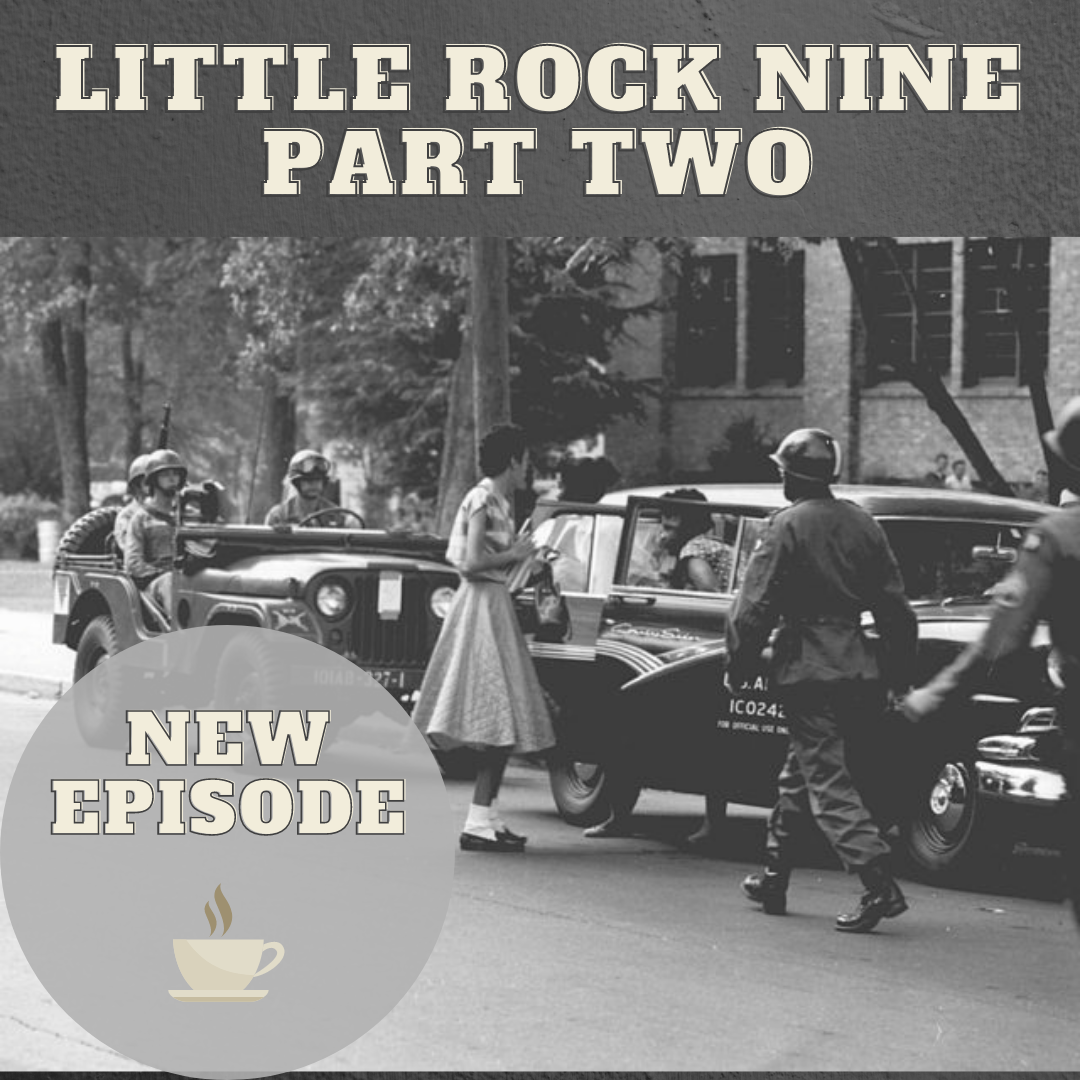 Note: I was contacted regarding potential inaccuracies to my episodes about the Little Rock Nine. Thanks to their feedback, this episode now contains an edit.

This week I dive into the lives of the Little Rock Nine after their first year at Central High School. Learn what happened to Ernest Green, Jefferson Thomas, Terrence Roberts, Elizabeth Eckford, Gloria Ray Karlmark, Minnijean Brown, Melba Pattillo Beals, Thelma Mothershed and Carlotta Walls LaNier after that tumultuous school year and what they are up to now.

Eckford, E. (n.d.). In her own Words: Elizabeth Eckford. Facing History and Ourselves. (LINK)

Hey every one - welcome to another bonus episode of Civics & Coffee. As I already posted this week on the socials - this pod has received one thousand downloads.

Honestly when I started this thing I thought for sure no one but my husband would listen. But with only a few months in I have already heard from international fans like Fredericka and young fans like Brody. The pod has found its way to listeners throughout the United States and has been streamed in five countries.

I am so thankful to each and every one of you who listen each week. You all make my day. And in the spirit of being grateful, I thought I would drop another extra episode.

So today I am going to sip on my pumpkin spice latte and do an episode on the history of Thanksgiving.

Grab your favorite cup of jo, peeps. Let’s do this.

Each year, nearly fifty million turkeys are devoured in celebration of the landing of the pilgrims and the Native Americans who helped ensure their initial survival. It’s a typical tradition for families and friends to gather and share what they are thankful for that year.

I know it’s 2020, but hopefully you all have something you can be thankful for. As for me, I am thankful to have made it through this crazy pandemic so far relatively healthy and still gainfully employed. I am also so grateful for all of you.

The origins of the thanksgiving story are tracked back to the 1621 colonists who landed at Plymouth and who were struggling to survive.

Having arrived in Massachusetts after a harrowing 66 day journey, many of the pilgrims as they’re now called remained on the Mayflower and proceeded to get sick and die off from exposure. In fact - only half of the original settlers survived their first winter and lived to see a New England in Spring.

Those who did survive finally made landfall and were promptly greeted by a member of the Abenaki who greeted them in English. He quickly returned with another native, Squanto who was a member of another local tribe - the  Pawtuxet.

Squanto helped the pilgrims learn the basics of survival in the new land - including planting corn, extracting sap from the trees and what plants to avoid due to their poisonous nature. Squanto also ensured their physical safety, helping broker an alliance between the pilgrims and the local Wampanoag tribe. Ironically, this brokered alliance between the Pilgrims and the Wampanoag would be the longest lasting peace between Europeans and the Indigenous People - securing peace for almost 50 years.

Finally off to a decent start, the pilgrims garnered success in their planting and come November, had achieved a gainful corn harvest. To celebrate, Governor William Brandford organized a three day festival - and invited the locals who proved so pivotal in their survival to join.

As we know, this is one of the last times indigenous Americans are applauded and thanked for their contributions in aiding newly landed settlers. If only we could have kept the attitude of the holiday in mind over the next few hundred years.

And so - with the gathering of pilgrim and indigenous people to celebrate harvest - the tradition of having a day of thanksgiving - usually to God - began. It was not a widespread or specific celebration until 1863, though presidents from Adams to Madison had issued proclamations declaring a day - or days - of thanks.

George Washington would be the first to have a declaration of thanks. I mean - he was the first president after all, so that makes sense. In 1789, Washington proclaimed a day of thanks for Americans to express gratitude for the end of the war for independence and and the ratification of the United States Constitution.

Days of thanksgiving continued to be one-offs and mainly celebrated in the Northeast. New York would actually be the first to call for an official holiday in 1817 and would spawn many copy cats throughout the states; however each state would celebrate on a different day.

Enter the woman nicknamed the Mother of Thanksgiving. Sarah Josepha Hale, an author who wrote the catchy Mary had a Little Lamb, amongst others. Hale was committed to making Thanksgiving a nationally recognized holiday. In her mind, the holiday would be a way to heal the country on the brink of a Civil War.

Hale got her wish when President Lincoln proclaimed a national Thanksgiving Holiday in the middle of the Civil War in 1863 set for the final Thursday in November. Not only does Hale get the credit for establishing the national holiday, many historians give her at least partial credit for the focus of a turkey as the main dish for the holiday.

In her novel, Northwood, Hale wrote a whole chapter describing a New England Thanksgiving and named the turkey as the centerpiece of the meal.

Another reason we eat turkey could be found in our history. At the outset of colonization, there were over ten million wild turkeys throughout North American. And unlike cows and chickens, turkeys provided no other benefit to a family farm and a single bird could feed an entire family.

There are some who theorize the first meal might have included turkey, but there is nothing in the historical record to confirm this so it really is anyone’s guess.

In 1939, President Franklin Roosevelt attempted to move Thanksgiving up a week in order to aid in the economic recovery during the Great Depression. This idea was heavily derided, with critics dubbing it Franksgiving. Ultimately, it did not go over well and Roosevelt signed legislation marking the fourth Thursday in November the official date of the Thanksgiving holiday in 1941.

Another common staple of the holiday is the parade. For me, it has been and will always be the Macys Thanksgiving Day Parade held in New York City. In fact, in an admittedly completely selfish moment, I was deeply concerned about whether there would even BE a parade this year given everything going on. Alas, the smart people at Macys and New York have a plan. Crisis averted.

The Macys Thanksgiving Day parade has been held since 1924 and is considered the most popular parade, with almost 3 million visitors lining the 2.5 mile parade route. And for anyone who has never watched the parade, I can tell you it is pretty amazing. My favorite part is all the balloons, but there are also floats, marching bands and the Rocketts.

Another popular choice on thanksgiving is the Pumpkin pie. I used to hate this pie as a child, but these days I love it. Love it so much, in fact, that I make a homemade one every year to go with dinner. So where did we get the pumpkin pie?

Again, you have the Mother of Thanksgiving for that. While the pumpkin pie as a dessert had been around for years, it was Sarah Hale - in her novel that seems to be an ode to the holiday - who placed prominence on the squash based dessert. However, the earlier, more primitive versions of the dessert called for people to roast their own pumpkin and to use the shell as their crust. Now that’s some Martha Stewart ish right there.

Thankfully in 1929, a meat canning company, Libby’s figured out a way to can the puree and lives have been made infinitely easier ever since.

And finally - what about the idea of black friday? Where did this come from?

While the main myth surrounds retailers making a boat load of money thanks to shoppers gobbling up discounted goods after their turkey coma’s wear off, helping them go from red - a loss - to black - a profit. The actual story is much different.

The term originated in 1950’s by the police of Philadelphia. For them, the day after Thanksgiving was all about preparing for the onslaught of shoppers and tourists who would be coming to town to watch a major football game - the U.S Navy and Army - held annually on the Saturday after Thanksgiving.

This meant the cops were unable to talk any time off, instead being forced to work long hours to deal with extra traffic and a jump in petty crime such as shoplifting. It wasn’t until the late 80’s that big merchants were able to re-coin the phrase and turn it into a consumer celebration and not a logistical nightmare.

The idea of black friday and surging sales has continued to expand in recent years with retailers opening earlier and earlier in order to cash in on consumer spending. However, brick and mortar stores are starting to lose to the online marketplace. A majority of Americans - over 60% have shifted their spending habits to the comfort of their couch versus camping out to get the latest deals.

As someone who has done both, I can assure you - the online shopping is WAY preferable.

For me, Thanksgiving is a holiday all about enjoying some good food, good parades and preparing for the official start of the holidays. I have started the day the same way for a number of years - I get up nice and early, ask (force) my super sweet husband to grab a paper and a pumpkin spice latte and either start the cooking process or put the finishing touches on whatever dish I am preparing.

Throughout the day I alternate between sipping my coffee, perusing the deals provided in the paper and watching the Macy’s Thanksgiving Day parade while I wait for dinner to be ready.

I know this year is going to be a challenge for so many of you out there. I hope you find a way to enjoy yourself and your family from a safe distance so we don’t have to repeat this weirdness next year.

I end this special episode with another heartfelt thank you. I appreciate you spending your time with me. Enjoy your holiday.